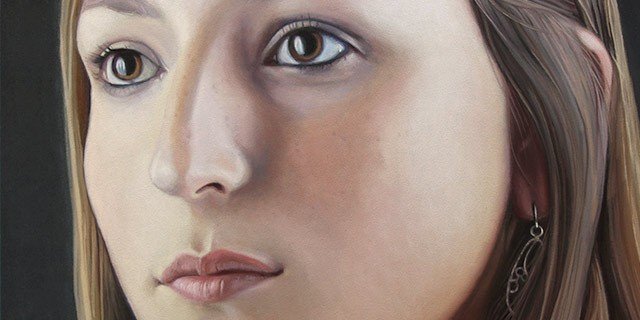 “A good portrait ought to tell something of the subject’s past and suggest something of his future.” ~ Bill Brandt
After lingering on the easels for several months, being worked on a little here and there, I’m finally calling these portraits of my lovely and brilliant stepdaughters, Robin and Kayla, complete. When you know a person’s face especially well, you see it in an infinite number of ways rather than a collection of fixed attributes. The grand hope for a likeness in a painted portrait is that it should evoke some deeper sense of the person’s character and hint at their life story. That’s a tall order. I imagine that I will never be particularly satisfied with any portrait that I paint because it is inherently only an impression of one brief moment in the life of a person in constant change. Even when I can be confident I’ve accurately rendered specific features, I cannot be certain of how well I’ve portrayed the person. Both of the following paintings were created in soft pastel (specifically Rembrandt, Unison, Sennelier and Mount Vision pastels) on drab green Ampersand PastelbordA commercially manufactured hardboard panel coated with clay and marble dust gesso. Cindy and I worked together taking numerous reference photos of Robin and Kayla in two separate sessions. In both cases, the lighting setup was a single key light placed at a 45° from the sitter and a bit higher than eye level, supplemented with a reflector on the opposite side to bounce some light to the shadowed side of the face. The girls were very patient with me as I asked them to move this way and that, trying to find lighting and expressions that I felt would be well suited to a painting. 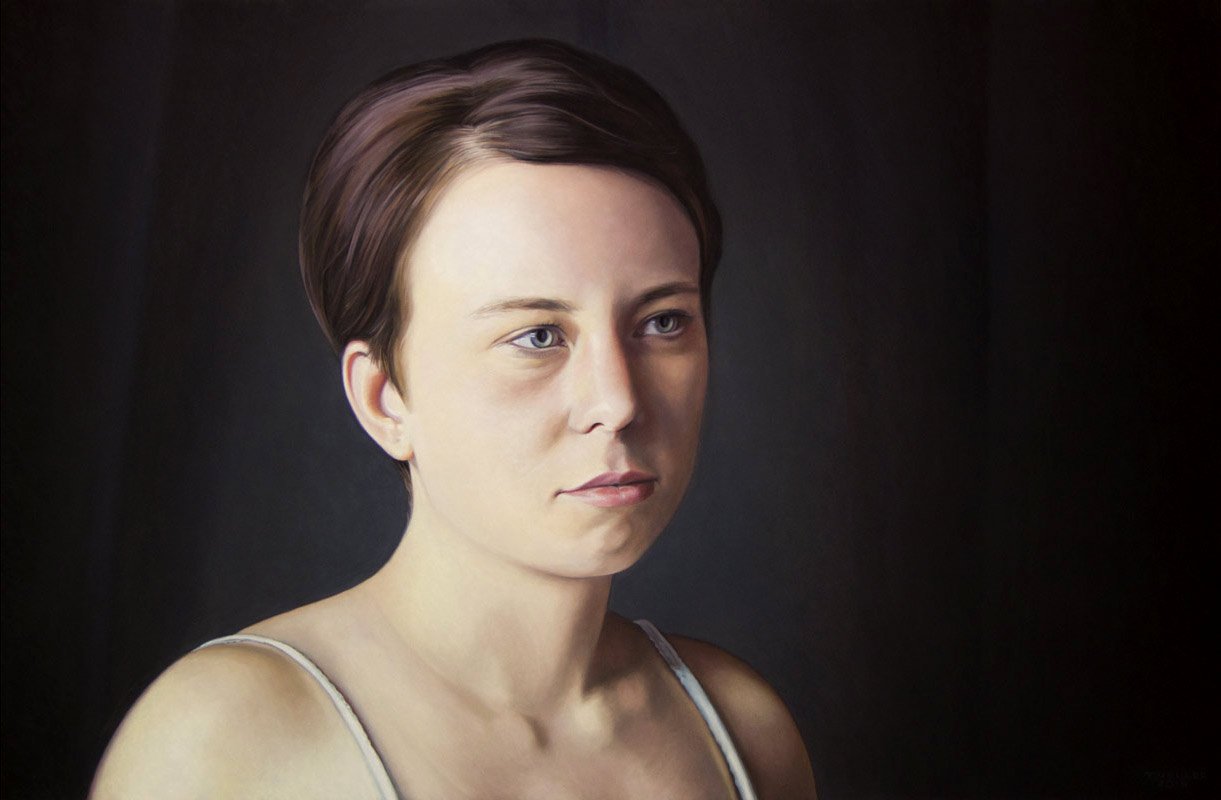 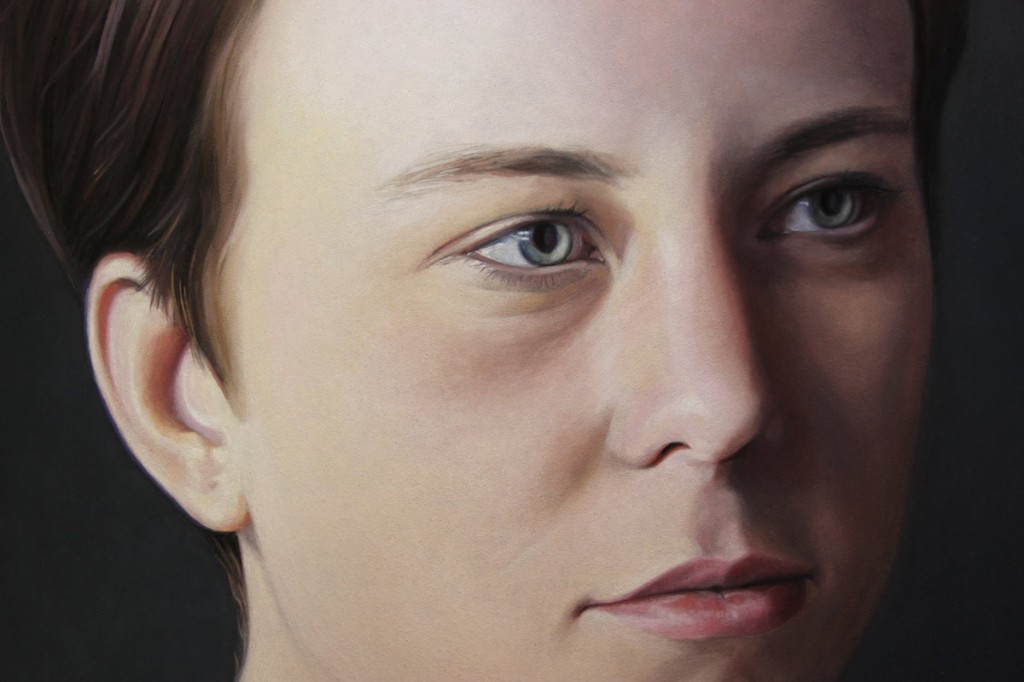 For the portrait of Robin (age 22), I decided on a horizontal composition. I began with a monochromatic underpainting with thin washes of ink. I discovered there were some flawed areas on the board where the primer wasn’t applied uniformly. These manufacturing defects made some passages of the surface slick and unreceptive to pastels. Grrrrrr. I had to resort to using sandpaper to remove the problem areas altogether. Then I painstakingly brushed in pastel primer to repair those spots, carefully blending the edges to match the existing surface. At times, I thought this painting simply wasn’t going to come together and I nearly chucked it out to start over from scratch! When I’d become too frustrated I would shift my efforts to other projects for awhile. Returning to the painting with fresh eyes often revealed solutions I hadn’t considered. Eventually I overcame the most bothersome issues and set it aside to focus on the portrait of Kayla… 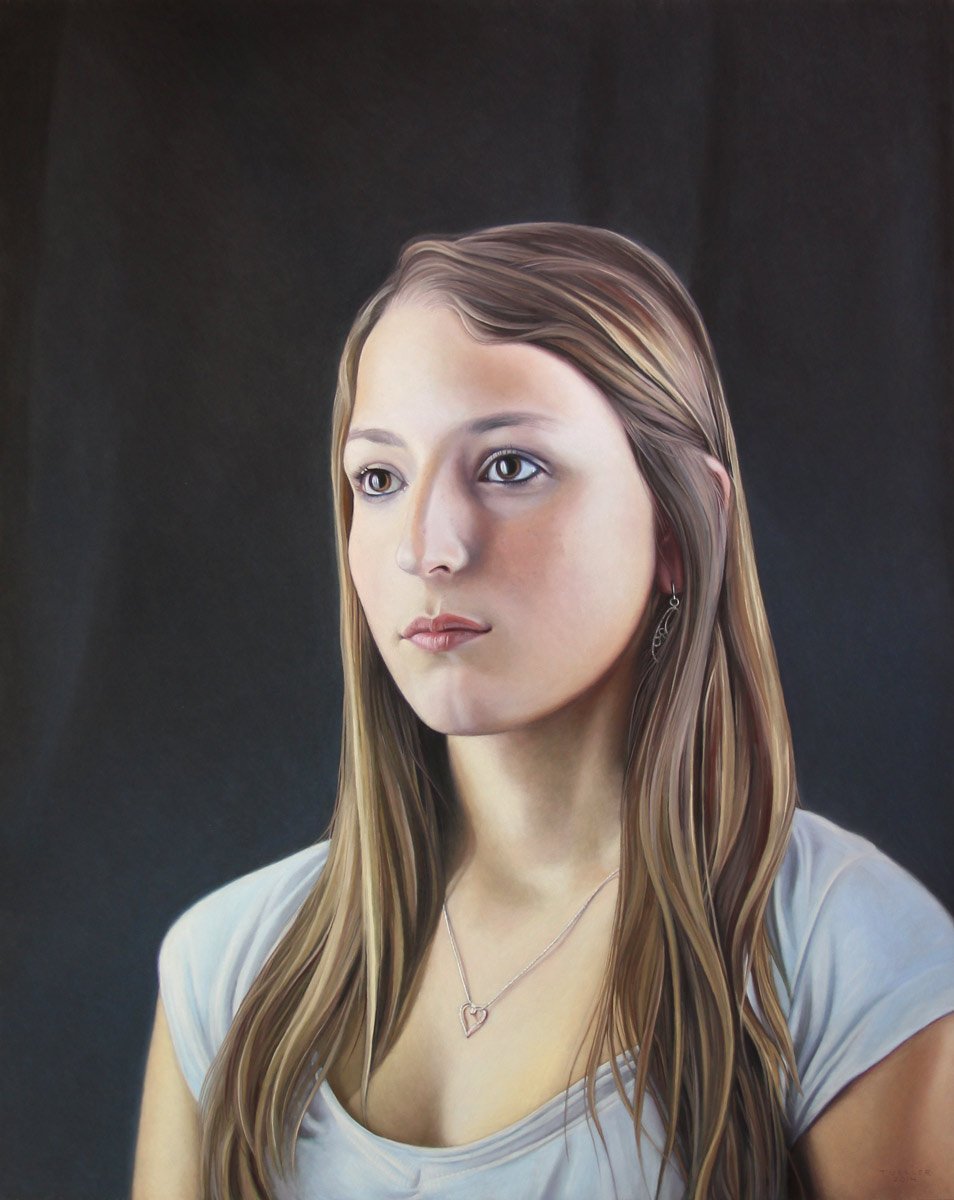 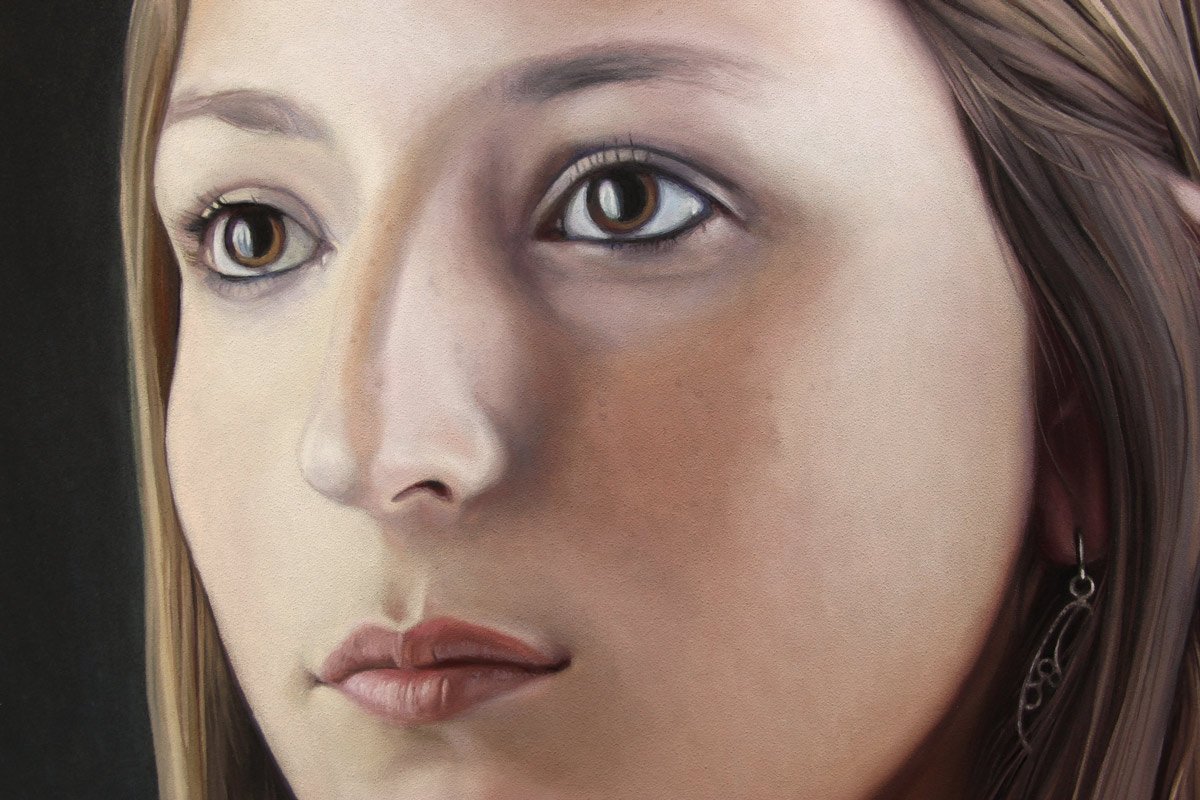 For the portrait of Kayla (age 18), I chose a vertical format. I roughed in the initial drawing with charcoal pencil and opted to skip an underpainting altogether. I generally felt more in control while working on this portrait than that of her sister. It helped that the Pastelbord had none of the flaws that made completing the portrait of Robin so difficult. Really, the biggest challenge was Kayla’s long hair, it seemed to go on forever and I spent a few days trying to find a good way to paint it. Once I had both paintings close to completion, I would notice this or that little detail and going back in to make numerous little refinements and corrections. I spent another week  or so, bouncing between the two paintings, softening edges, deepening shadows and sharpening highlights. Now the big test…show the portraits to the girls and hope they aren’t mortified!

“When I painted his portrait and offered it to him, he glanced at the canvas, then, looking at himself in the mirror, thought a moment and said: Well, no! Keep it!” ~ Marc Chagall

If you are not completely satisfied with your purchase, you may return it within 30 days of delivery for replacement or refund.

UPDATE: I will be returning to easel making in July, 2022. It will take a while as I get new inventory ready for ordering. Thank you for your understanding. Read More >